It was another tough practice: a humbling, difficult, painful sort of practice.

Coming out of savasana, I roll onto my side and dedicate the benefits of my practice to my son.  He’s been on my mind a lot lately. As he prepares for another trip overseas which will potentially put him into danger far beyond the farthest extent of my imagination. Although I try not to think of all of the horrible ways (physical, mental, spiritual) he could be affected, I am currently struggling to remain positive in this regard. Although I know I must stay positive, the process is difficult at best.

As I lay here, I reflect on the difficulties that I bumped up against in today’s practice and, as I offer up the benefits to my son, pray that somehow my ability to stay the course, and to not let the tearful moments defeat me will help my son do the same.

With my eyes still closed, I push up to seated with my hands in front of my heart in anjali mudra. I give thanks and pray for  strength.

There’s a reason we practice in the Mysore room, rather than at home. At home, the distractions continue to bombard you. They bling, and ring, and knock on your door – demanding you attend to THEM and NOT your practice. It throws you off. After the 3rd or 4th call for your attention, you step off your mat to see what’s up. Maybe you look but decide not to respond. It matters not; the message sits in your head and gets in the way of your focus.

I’ve come to learn that I’m not that strong in my resistance to the pulling forces. I text back in attempt to close the loop. The mere fact that I have put the distraction ahead of my practice invites the onslaught of thoughts to flood my consciousness with idle chatter. And I am LOST. 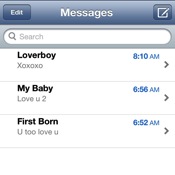 This is why I made myself go to Mysore instead of practicing at home. Because textasana is not part of the primary series. Nor are any of the other distractions that pull me from my mat on a regular basis.

And that, dear friends, is a beautiful thing.

As were the incoming text messages that were waiting for me when I finished my practice.

Lately, all my good-intended plans to maintain consist in my commitment to ashtanga ever seems to meet up with are excuses. My son falling back to sleep (needing me to wake him several times each morning), my stiff back, tight left hamstring, longer work days, exhaustion… the list goes on. Monday night, I vowed to not let the excuses get in the way of making it, not just to my mat, but to the Mysore room. When morning came, I found that not only had my son fallen asleep doing his homework but that there was no hot water in the house. Somehow, I managed to relight the water heater, and see to it that my boy was awake enough to attend to his schoolwork. And then I actually left for Mysore.

I found myself a spot by the window, and began. It was a SLOW and UGLY process trying to find my way through the series of set poses with my body as stiff as it was. I did my best to maintain my dristi and remain focused on MY practice but, there were times when I found myself admiring another ashtangi’s grace and ease from downdog — remembering where I was just a few months ago when things seemed to be opening up and releasing. If I really was a dog, my tail would be tucked between my legs, for any good ashtanga keeps their focus on their own practice.

Not only did I lose my focus, I discovered that I’d skipped poses long after I should have done them. Not knowing if I should go back, I moved on, reminding myself to FOCUS! Periodically, my teacher would come help me go deeper into a pose. She noticed, I’m sure, how weak and inflexible I’ve become in my weeks of inconsistent practice. In fact, anyone could see — if my mat fell within the periphery of their gaze. I’m exaggerating of course. It wasn’t ALL bad. There were times where I had found focus, stability, and even a bit of ease. Like in life, it’s the tougher moments that stand out though.

At one point, I was feeling pretty good. I was in one of the standing revolved poses when my teacher came around to assist.  She helped to level and stabilize my hips while I moved my heart towards the heavens. When I’d gotten there, I made eye contact with her and we both smiled. I thanked her as she left my side, then I enjoyed the pose for another breath or two. But as I was coming out, I felt a tug on my right side – which I quickly discounted as normal growing pains and moved on only to discover that it wasn’t normal at all. Nothing was normal after that. My back got stiffer and stiffer, and I got weaker and weaker, until I finally decided to end my practice early. I did bridge instead of wheel, countered with a forward fold, and quickly ended it after that (skipping the closing series all together). By the time I arrived at work, I could barely pull myself out of the car and up to standing and it hurt to breathe in fully. I’d really done it this time, and all because I’d let excuses come in between me and my practice for weeks on end.

Thankfully, my chiropractor had a cancelation that same day. He rotated my vertebrae back in line with the others, pushed my sacrum back where it belonged, and helped release weeks of built-up tension on the left side.

The following day, I did a gentle practice at home and vowed to return to Mysore the following day.  But then the excuses popped up again. I told myself that my body was too stiff for mysore and that I’d just do my practice at home.  Then, after finishing the sun salutations, I left my mat to rescue my son from issues uploading his essay for school to the turnitin website… and never made it back. I didn’t make it there for today’s Led Primary Series either which is unfortunate because there is no Mysore at my studio over the weekend. Instead, I started with the my own ashtanga practice but deviated from the series just after the Sun Salutations. After inserting a chair twist in a desperate attempt to realign my spine, I fell into my own series of do-what-makes-you-feel-good poses. By the time I hit the shower to get ready for work, I felt good physically and equally excited about not giving up on my practice all together. Yet, I also felt a little guilty for not sticking with the sequence.

END_OF_DOCUMENT_TOKEN_TO_BE_REPLACED

As I turn out the light on one exhausted 15 year old, who’s fallen asleep while trying to complete his homework, I think about how different our lives were just 3 weeks ago. Back then, he was sleeping in (past noon on most days) while I went to the yoga studio each morning for the early morning mysore practice. I was dedicated to learning the ashtanga primary series — practicing each morning and reading up on it at night. It had become a routine that my body had responded nicely to — after the initial shock of my starting the rigorous daily practice. I loved that my days were not as painstakingly rough as they have been, thanks to my chronic bout with back and hip pain. Aside from finding comfort, my days were energized and I was actually sleeping at night! But…

Then came the return to school. High school, to be more precise. Football practice too. And HOMEWORK.

The return to the school routine was devastating enough to my morning routine, then came another set of changes. Included in the changes was a new expectation of longer work days which was placed on my department of four. After all my efforts to arrange a carpool so I could hit the mysore room every other day wouldn’t matter. Even when it is not my turn to drive the kids to school (which gets me in the general area of the office an hour earlier than I am used to), going to mysore is still not the option I’d hoped. I’d still have to abbreviate my practice.

In the past couple of weeks, I’ve tried to keep up my home practice but, sadly, I have become so tight from my reduced practices that once again I HURT. It feels like I’m starting over. And, in a way, I am.

I start off my mornings meditating for 20 minutes, just so that I can move. Then, I use whatever time I have left for a slowed down practice. In the evenings, I try to set aside at least 30 minutes to read and enhance my understanding of the practice. It’s a start but I can do more.

As I look to my son to “up his game”, I recognize that I too must up the ante for my own good. Perhaps it means a shorter but more consistent practice… maybe at night. If I want to see a change, I need to create it by putting forth the effort and consistency that it requires. Right action… to be the change that I wish to see.

Lately, I’ve been overwhelmed with the reading materials for my teaching program. I read the words with very little, if any, understanding. It’s frustrating because, not long ago, I felt like I was actually starting the get it. Now, the history, philosophy and concepts are all a jumbled mess in my head. The Koshas, Kleshas, Vedas, Yamas, Niyamas, Gunas: I can’t keep any of it straight. This doesn’t even touch upon the asanas (english terminology and corresponding sanskrit) or the anatomy components which I’d hoped that my nursing training would have been more helpful in me understanding. I seems that I have forgotten quite a lot. 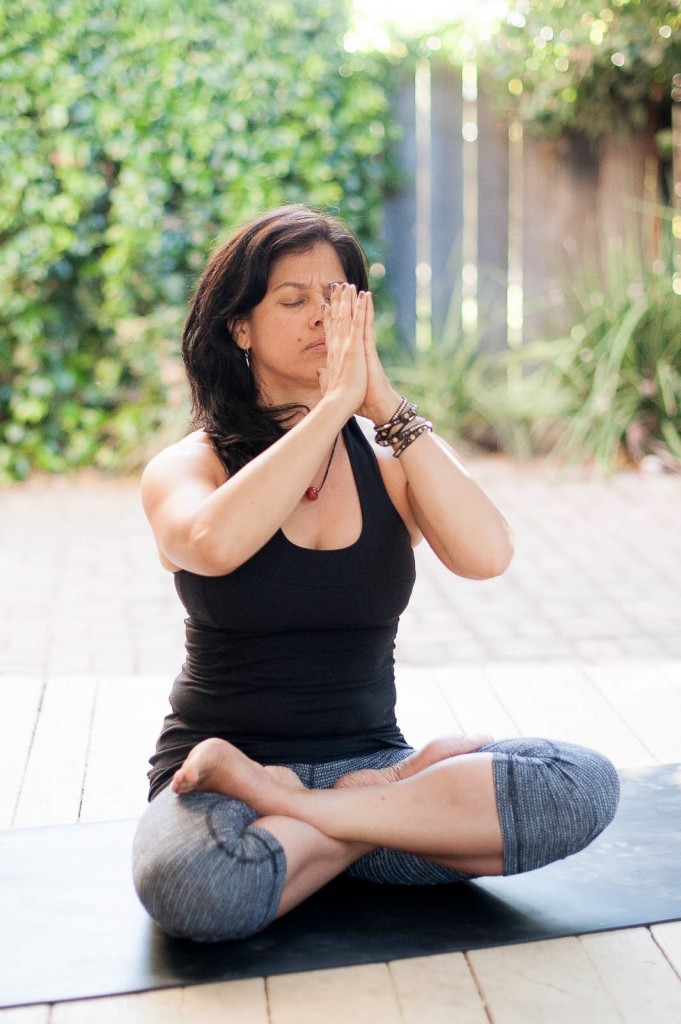 I am pretty sure that I know more than I think I know. At least I hope so. But I am equally certain that I know no where near the amount of information I need to have learned by the time I test out. It’s now September. The year is rapidly coming to an end and I have publicly announced that I would sit for the written exams by the year’s end. I can’t do that if I am forever at the 4% mark in the ebook on yoga history and philosophy. It’s only one of many books that I have still to read.

I have  so far still to travel on my path to certification, yet here I have my yoga website nearly complete. On one hand, it feels like a lie. Yet, this part of the process is one I felt confident in my ability complete. I just hope it isn’t all for nothing.

With my hands in Añjali Mudrā, I pray to the God whose teachings I grew up learning about, the god of my heart, and to every god I’ve ever read about. I give thanks for showing me how to get as far as I have and ask for direction in moving forward. Please, show me the way.