I was given my first pose of Sthira Bhaga (third series) early on in the coronavirus pandemic while we were sheltering in place and practicing on virtual platforms 100% of the time. I took to it and soon was given additional poses until finally, I’d reached a clear stopping point — at least for the time.

Sthira translates as “strong,” “stable,” “steady” and “resolute” while bhaga means “prosperity,” “good fortune” and “happiness.” The term is often translated as “strength and grace,” but also as “divine stability” and “sublime serenity.”

Indeed, I enjoyed the idea of being on a path leading towards more stability, strength, and grace. But as life and luck would have it, my path took a detour over the past couple of years. I have been experiencing far less sthira, or bhaga, and doing very little of my third series practice. In fact, I have hardly been doing it at all. 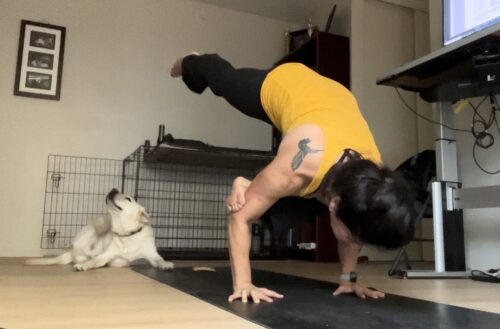 For some unknown reason, I decided to revisit my third series practice today. It is not that I have worked back up to it. To the contrary, I have been limiting (a.k.a. avoiding) putting my leg behind my head lately due to some new knee discomfort that began in mid-December. Today, however, that didn’t seem to matter.

Having not set my alarm, I woke up feeling well-rested, strong, optimistic, and curious. So, I gave it a go.

It was as one would expect after a long hiatus. The practice was unpolished, rough, and far from stable. And still, it felt amazing to push myself a little more. I felt strong, capable, and happy.

I can’t say how much third series I will be doing in this new year. But I would like to invite sthira to join me a whole lot more in 2023 — on the mat and off it.