Your yoga mat is often described as a place to work through the “stuff” that you are processing in your every day life. In the 10 years that I have been practicing, I have known this to be true. Sometimes, stuff that you may have been overlooking gets revealed to you during your practice. In my experience, when this occurs, it’s generally not the happy stuff that makes itself known.

The thing is, life just gets messy.

Well, sometimes it does. When it does get messy, you have a couple of choices: You can stop everything and run around picking up the messes, or you can let it be for a bit and carry on. 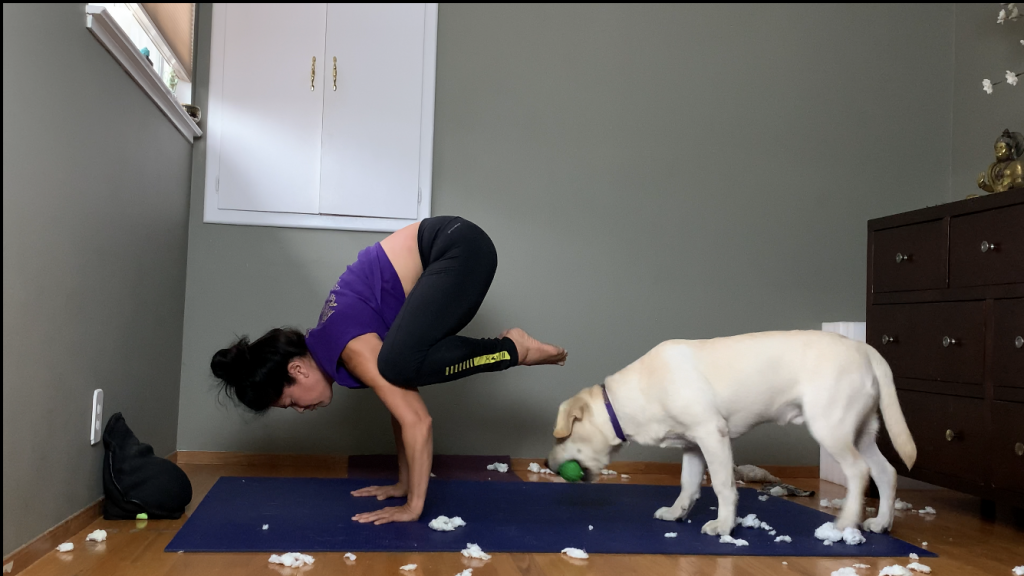 The funny thing is, neat and tidy doesn’t always work out. Similarly, sometimes things come out beautifully in spite of the mess.

As I think back to the approach of this year, I held a bit of uneasiness which I didn’t quite understand. I chalked it up to the consideration of whether or not to “put myself out there” again after almost a year of learning to be with myself. I never thought the year would unfold as it has. 20/20 has been fought with the pandemic, racial injustice and protests, hurricanes, wildfires…and the election! My high-level words of description do not begin to describe the reality of what is going on in these current times.

I am not alone when I pray for the year to be behind me, yet am afraid of what the next will hold. The uncertainty feels a lot like the feeling I faced after my husband, Tom died. I feared that we’d lose the house we saved everything to buy, feared my teenage son’s rebellious behavior would take him from me too, and I feared for the my youngest who had nightmares of not waking up. Meanwhile, Mr. Goodneighbor spotlighted his own belief that God would not give me such challenges if I couldn’t handle them. I appreciated the reminder of my faith. I prayed and faced my fears with my best self. Thankfully, we are all still okay.

I believe that, in what remains of this year, we must work together (albeit from our place of shelter) to be our very best selves: PRAYing for, HELPing out one another, listening, sharing, educating, & learning, and each of us going out to VOTE. We cannot afford to wait for this year to end in order to start again. We must be our best selves and make the changes happen now.

By now, you all have probably noticed that practicing at home has its pros and cons. For me, not having to pack up all of my work clothes, lunch, and other items needed for the rest of the day, coupled with not having to navigate the morning commute, is a HUGE plus. Accountability and discipline are a must to keep me coming to my mat day after day. I don’t always feel it, but I do it anyway. When it is all said and done, I am ALWAYS glad that I did.

Connecting to my community via zoom helps as well. After the laptop incident, I don’t dare use my laptop for the connection. Instead, I use my phone. I can’t see everyone at once, but I can hear the breath, voices, and comments while I am on my mat. It’s not the same as being in the room with them, but similar in a way. What I mean is, you aren’t supposed to be looking around, listening in on everyone else’s practice – but knowing you all are in it together in the collective flow is really powerful.

Then, there is my new puppy…

Kobe has been with us for five weeks now. From Day 1, I have made an effort to let him be with me during my practice. To be honest (or frank), I don’t really have a choice. In the beginning, he woke rather early, and had already gotten some rigorous play time before I rolled out my mat. So, usually, he fell back to sleep shortly after my standing poses were complete. Now that he is sleeping through the night, he wakes at the start of Mysore and is fully charged from a full night of sleep. And he wants to PLAY!

Monday being a moon day, I incorporated puppy play into my mini practice. In hind sight, this may have been a mistake. For on Tuesday, he repeatedly brought me the toy I had played tug-o-war with during practice the day before. Only NOW, I didn’t want to play. He and his toy were repeatedly put in my practice space only to be ignored. Young Kobe persisted, tugging on my ponytail, licking my face when I was in the most vulnerable of poses (i.e. kapotasana, supta vajrasana). I struggled, feeling guilty for ignoring him while desperate to not lose my practice.

On Wednesday, I begin again. I am determined to teach my pup some mat manners. He climbs on my mat as soon as I roll it out. “No. No.” I say, picking him up and moving him.

It quickly becomes a game. I try to hold both my composure and my ground. A part of me wishes that I wasn’t on zoom for all to see my struggle. The other part of me doesn’t care, confident that my peeps (who are both my peers and my students) don’t care. The practice continues. I use the gate intermittently to create some physical separation (hoping to better illustrate the command). The familiar potty whine comes. We take it outdoors. Then go back inside only to find that Simba (our 9 year old dog) has joined the party.

I am on the verge of tears and just about ready to throw in the towel, when Kobe lies down for a nap. I finish up my practice to get ready for my first meeting of the day…thankful for having not gave up.

When I was a kid, we used to joke at the foolish sounding excuse “the dog ate my homework” – until we were in a place where that was our only excuse. Come on, be honest, at one time or another you too were probably in a situation where your dog ruined your ability to turn in an assignment. For me, I believe my dog actually pee’d on my notebook. For my youngest son, well our dog actually chewed up the textbook. I hadn’t actually thought about the dog excuse until last week when…

My dog ate my laptop.”

Okay, okay. I am exaggerating; he barely put an indent on the glass screen. But, within minutes of the incident, my entire screen went black.

Until COVID-19, I never would have imagined leaving my laptop computer on the floor and look away for even a second – especially with a new puppy around. Yet, practicing yoga via zoom has been the new norm for 4 months now. Young Kobe has been in the room with me and my computer for 3+ weeks with incidents only of another nature.

I’m a fool, I guess. For I somehow pictured being able to have my pup and practice too. I didn’t foresee my oldest son (the other earlier riser in the family) suddenly feeling independent enough to move out. It’s all good but my practice has changed considerably.

If you catch a glimpse or two of my yoga practice these days, I hope that you are not too distracted by it all.  If you wonder why I even bother to practice while my puppy is in the room with me, it is because it is my only option. As to why I join the zoom, the reason will vary depending on when you ask me. On some days, I will tell you that in doing so I am still held accountable to at least try to maintain some sort of yoga practice. Other days, I may tell you that I am doing it to support my fellow teachers and community or it is an attempt to show the pup the routine – with the hopes that he will co-exist with it in time (hopefully not TOO much time).

Anyway, suffice to say that my world has turned upside down once again. Nonetheless, I still hope to eek out some videos now and again for you. In fact, I recorded and posted one just before the laptop incident – even though I am headless for much of the standing portion. There is another (post-incident) video on my phone which will be processed in uploaded once I have my laptop back from repairs.

My asana practice feels like it is getting eaten up by tiny but sharp little teeth. And my home is in danger of the same. Sleep? Well, that falls into the same category.

We woke just after 5 am. This was a nice change from the pattern we have been on this past week. However, the shift in Kobe’s sleep-wake cycle means his naps shift as well. So, I did my surya namaskars and half of the standing poses in the backyard while he did his morning elimination and outdoor exploration. The stakes were raised in utthita hasta padangusthasana, which has never easy for me, as he curled up beside my standing leg. We did primary series today as I feel the need for more grounding these days. Although, I did add in some intermediate when I thought I could get away with a little more practice time (now on zoom with my sangha).

Tummy down backbends around a sharp-toothed canine (no matter how small) are risky business. It seems that Kobe is less interested in the sounds coming from the computer now that he is used to the routine. As a result, the excitement of my fingers and toes finally being at mouth level is rather exciting to this young fellow. I navigate carefully, and take it outside at the start of the all-to-familiar whine at the screen door.

At some point, it feels like it is time to wrap it up: like I am either risking full destruction of my home-sweet-home OR being a bad puppy owner. Neither are true; I am just worn out already. So I move to the closing part of the practice and then, it seems, Kobe does too. He is still in savasana on my mat.

I am making modifications, trying to let go of the attachment to my normal routine, and enjoying moments like this — when this little biting whirlwind of a cutie is quietly resting. I guess this is why puppies are so cute.