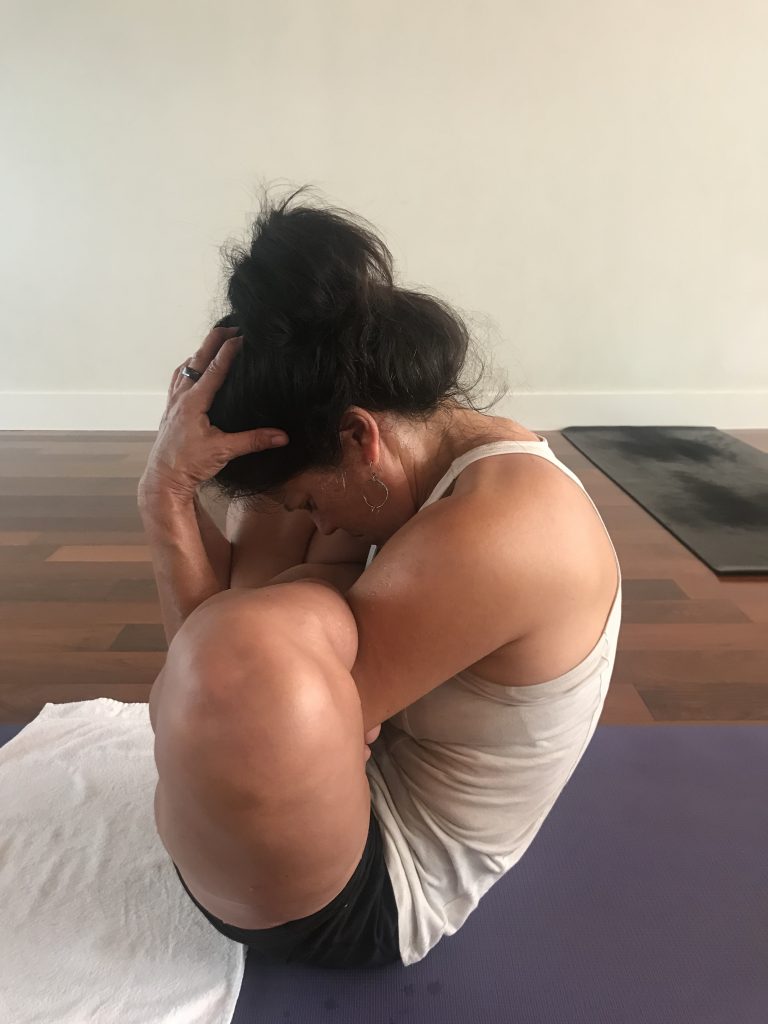 Do you know that voice inside your head that tells you that you are not enough? It’s the voice that told me (repeatedly) that the world didn’t need me to finish off my yoga teacher certification — because I didn’t have anything of value to add to the yoga world. Sure, I had other priorities such as being there for my sons’ football games, boxing matches, and other priceless moments that I wouldn’t have missed for the world. But, the fear of standing in front of the class as the teacher was real. It still is. And that darn voice keeps talking to me.

The truth is, I KNOW deep down that I have so much to share. From the time I first rolled out my mat (barely able to touch the tips of my fingers to the floor in the sun salutations) to now, I have learned a lot — about yoga and about myself. This voice that tells me that I am not enough isn’t me. And it tells lies, testing my ability to see the truth.

So when I saw the desperate call for subs on the Breathe Together Teachers Page, I shushed that voice and agreed to teach, not one, but TWO classes this coming Sunday. Focused on bringing strength to the foundation of the pose (primarily legs), we will be working on Santosha (contentment) and therefore standing up to the voice in our head that may be telling us lies.

If you are in the area, please come practice with me at…Breathe Together Yoga. I am subbing the following two classes this Sunday, October 13th, 2019. 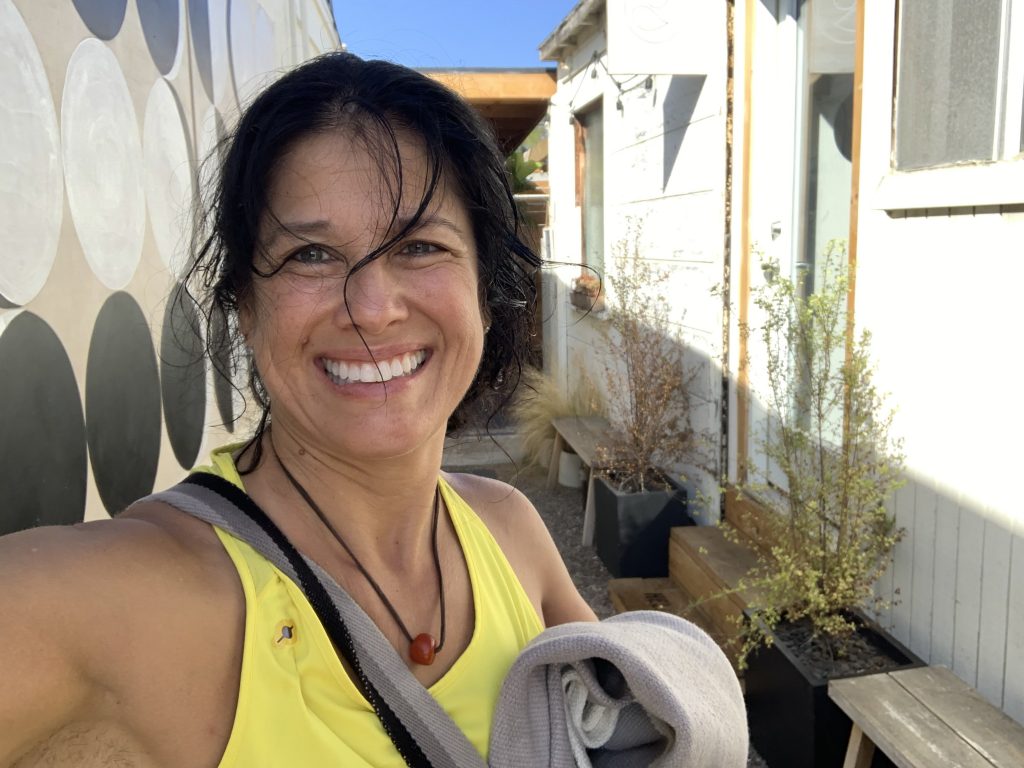 This is me after two days of morning mysore at the Ashtanga Yoga Center (AYC) in its new home. Being able to fit these two mornings at AYC into a crazy business trip was something short of a miracle. But, it happened and, for that, I am grateful.

Over 2 years has passed since I last visited AYC. Many things have changed but, thankfully, the studio is just as welcoming as before. In addition to seeing Timji again, I also got to meet Jen René (the teacher of the online ashtanga yoga teacher development program which I took in July-August) in person.

During my brief visit, I got a lot of helpful tips and a ton of inspiration.

During my preparation to teach the class that would ultimately decide if I was certification-worthy or not, I began working on learning the traditional vinyasa count in Sanskrit. Over the years, I have committed to learning the Sanskrit name of the poses in my given practice. For me, it is part of the practice; in a sense, learning the name is like taking ownership of the pose. Although I have made a point to know when and where the inhalations and exhalations occur, learning the traditional count was never something I felt compelled to learn.

Until… I was asked to substitute teach the Led Primary class at a newer yoga studio in the Bay Area. The led class occurs weekly at many studios and serves as a complement to the students’ regular Mysore practice. While the student follows their own breathing pattern during their Mysore practice, they learn efficiency when asked to keep their practice married to the teacher’s count (which may be faster or slower than their usual pace). In this led class, the teacher calls out the names of the poses in Sanskrit along with traditional vinyasa count and, often, not a lot of other verbal cuing. Because the student already knows the sequence, there doesn’t need to be a lot of other direction.

So, I set out to learn it, naïve to the complexity that I would soon face. I quickly learned that it is not as easy as 1-2-3… There are poses which used to begin with a full vinyasa beginning from ekam (1) standing at the top of the mat, arms rise, and so on. These poses now have only a half vinyasa where the count begins with the student jumping through to seated from adho mukha svanasana (downdog) and therefore the count begins at sapta (7). That was the least of my confusion. There were other instances where the count reverted back somewhere in the previous number sequence, sometimes repeatedly, other times only once. After a few days of carefully reviewing various recordings and writings of the practice, I became completely overwhelmed to the point of tears. It wasn’t until my teacher shared with me that “traditional” count was not at all traditional in the sense that every teacher doesn’t call it out exactly the same. She advised me to just learn when and where the inhale and exhale goes for the test out and even upcoming the led class. Then, keep working on learning the count and, over time, it will come.

And, while I don’t believe that learning the vinyasa count makes you any better of a student, I wonder if learning it somehow energetically creates a stronger bond to the flow of the practice in a similar way to my commitment to learning the names of the poses as a way to “own” the poses that are part of MY practice. It’s just a thought. What do YOU think?

Less than an hour after teaching my test out class to officially get my JOY of Yoga 200h Teaching Certification, I was asked to start a class for a teacher who had gotten caught in traffic due to a big accident on Highway 17. “It will be about 30 minutes,” she said, “just teach them what you just taught us. You’ll do fine.” I laugh nervously but wasn’t going to say “no” for they needed me and I just cited a quote in my test out about being called upon to teach.

When we are called to serve, we need to act as if we are qualified — even when we think we are not truly capable.” – Jennifer Prugh, Founder of Breathe Together Yoga.

When I spoke of this feeling of being called to serve, I was thinking about (1) my teacher needing assistance with our Mysore Program, and (2) about a request to substitute/guest teach at a new Ashtanga Yoga Studio in Los Altos. I never dreamed I’d be called to pop into a Vinyasa Yoga class to teach. Still, a calling is a calling. And I am not one to leave someone in need of help if I have something to offer.

So…I did it!  I rolled out my mat at the front of the class and introduced myself. I explaining that their teacher was delayed but on her way, and that I there to hold the space for her until she arrived, adding that I was going to get them started with a few sun salutations and a sampling of the ashtanga primary series.

I taught for about 50 minutes then welcomed their regular teacher into the space when she arrived. Upon leaving the room, I had already begun a list of inner critique for my teaching. This included not learning anyone in the room’s name. *frown* I heard the class clapping as I left and knew it could mean one or two things: Either they were happy with my teaching OR they were relieved that their teacher had made it there. Nonetheless, I held my head high in knowing that I had done my best — and next time will try to do even better.

I have been working diligently on the last few poses before the 7 headstands of Intermediate Series (aka nadi shodhana or Second Series). Like the rest of Intermediate Series, mastering these poses has not come easy. In fact, I don’t know that one would say that I have “mastered” any of them. Unlike Primary Series, where I yearned for the next pose almost immediately after receiving a new one, my journey in this series has been unhurried and somewhat cautious.

I remember a point when my unwillingness to meet kapotasana had changed to a curiosity of the pose. I began working overtime on laghu vajrasana hoping to meet my teacher’s expectations of what she would consider mastery (or an acceptable level of proficiency). Then, kapotasana had its way with me. It undid me from the outside in and left me sobbing. Some time later, the leg-behind-the-head poses began working on me — as I began working on them. They broke me down literally (sacroiliac joint issues). I broke up with them for a bit. Then, after a time of missing them, rekindled the relationship. Then came pincha mayurasana, karandavasana, mayrasana, vatayanasana. One after the other, with a few gentler poses dropped in for a little sanity check, the poses told me that I “can’t” and that I am “not enough” every morning. By the time I reach supta urdhva pada vajrasana, I’ve surrendered to the practice.

When Leigha, our guest teacher nonchalantly mentioned the plan to finish off the series by the end of the month, a part of me thought she might change her mind once she saw my practice. I feared that I might lose a few poses, in fact. I didn’t lose any, but she didn’t let me skate either.

There was so much work to do and, although July has 31 days, the month hardly seemed long enough to master the task(s) at hand. 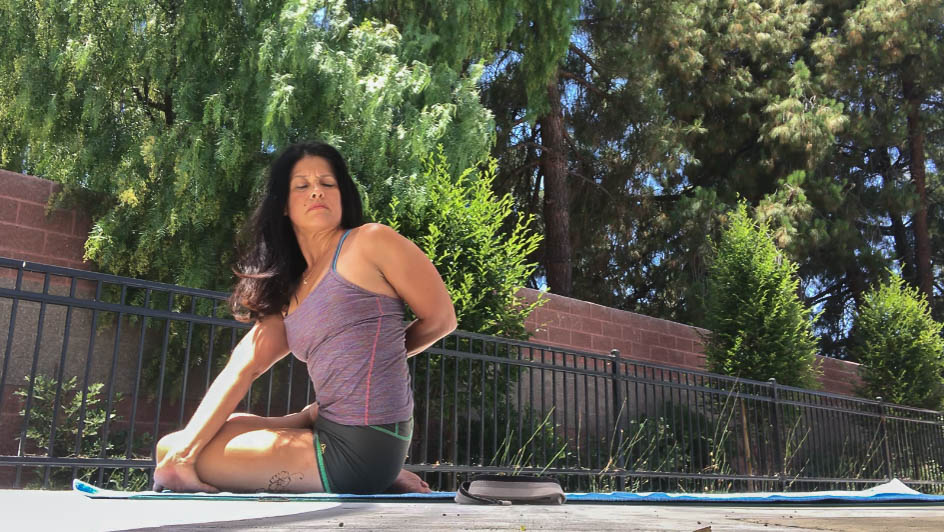 Strangely enough, I no longer was satisfied with what I had; the carrot had been dandled and I was now chasing it down. Once again, I began working overtime — studying the poses and practicing them on rest days (moon days and on Saturdays). My practice took on a new infectious persona of sorts. She woke me up before my alarm, and found her way into my dreams as well. She beat me down energetically so that I was fully worn out early in the evenings too. In an odd way, it was liberating.

So, it was pretty funny when Leigha cheerfully announced that mukta hasta was coming my way. Thinking she said mukha (face), I asked her what she meant. I was still doing my sun salutations. “MukTa”, she said, “means ‘liberated’.” She could tell that I still didn’t know what she was referencing. “You’re going to be getting a few headstands today. So get ready.”

I must admit that, after all my hard work, I do feel kind of liberated to be coming to the end of Intermediate. I know that I still have a lot of work to do in those poses that used to have me believing that I wasn’t enough. And that’s okay.