One morning, while en route to yoga, I questioned why I was even going. My body ached something fierce and my mind was far from finding acceptance with how I was feeling. It was hard not to set an expectation for a “bad practice.” I reminded myself to have an open mind and not judge what was to come. After all, that *is* the point of the practice: the same sequence of poses, done in the same order, 6 days per week unfolding in a new way each time.

The radio played as I creeped along the freeway. I shook my head, surprised to find traffic so heavy this early in the morning. Ahead of me, the clouds (both dark and light), caught just a hint of the sunlight. It was beautiful and immediately made me feel grateful to have slowed down just enough to notice. Just like that, my mind shifted and I smiled thinking how easily the bad can be turned  into something just a little bit better.

As for my practice, I do not recall how far into it before I became aware that I was no longer feeling any signs of discomfort. I guess, like the sunlight behind the clouds, the body to which I awakened also had a few surprises for me. A short while later, even though the pain had left, I told my teacher that I wasn’t sure how deep of a kapotasana I had to offer. A few deep slow breaths into the pose, I felt a sudden wave of release. She had said, “Let go,” and so I did. I let go of fear, my need to protect my heart, and I let go of expectations…at least for a time. And this too was new, for I’ve been holding on to a lot lately. 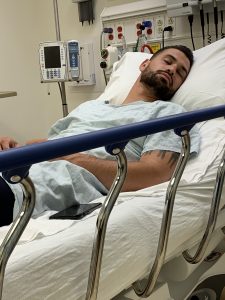 Fast forward a bit. I had volunteered to sub another yoga class. The teacher who had made the request had asked for subs earlier and was still looking. I didn’t know her but, knowing that I could carve out the time, I decided to sub the class. About an hour later, I realized that the class I was to sub belonged to none other than Jenn (the owner of the studio and my 1st and probably most influential teacher). The monkey mind began talking to me, telling me that I wasn’t good enough and that I would fail miserably. Truth or not, I had to do my best to exceed this expectation that I would fail for I didn’t want to let Jenn down.

However, life got in the way of me obsessing over the class preparations. In addition to increased responsibilities at work, I found myself with my firstborn in the ER at the VA hospital for the better part of Thursday. I didn’t begin working on the sequence until Friday evening. In some ways, it may have been a blessing, for the last time I subbed, I ran through my sequence over and over on my mat and was left quite sore for several days.

Honestly, it’s hard to plan for everything. It would have been nice to realize that the class was to last 15 minutes longer than the usual classes; I’d looked at the times but it never registered. I was glad to discover this before ending insanely early. Still, the omitted vinyasas made for a shorter sequence and I had to throw in a few backbends, give them a long savasana, and offer up some pranayama as well.  In the days that followed, I watched the teacher FB page, anticipating complaints but hoping they wouldn’t be too bad. Thankfully, what I expected never showed.

So, now, I have agreed to sub another set of classes for some really amazing teachers.