I’m not sure what it is exactly, but there has been a shift happening in my body. It has been going on for about a year but the past few months, in particular, have been…. interesting. I use this word because other than a prolonged cycle, the changes in my body are not what I am accustomed to hearing women who are going through “the change” complaining about. Perhaps they are a part of it; perhaps not. In particular, my relationship with mula bandha has changed. I can access it but not with the same intensity as before. And if I try to improve upon it, I lose it all together.

Because ashtanga practitioners in particular have a distinct awareness of their cycles, I wonder if anyone else has experienced a similar shift in their body. Is there a link to the transition into menopause? What are the physiological aspects at play and are there any considerations I should be respectful of in terms of my practice?

Just yesterday my boyfriend, Larry returned from a yoga retreat to Nepal where he trekked the Himalayas, practiced yoga daily, delved deeper into his studies about the yoga tradition, and took in the sights. He had a fabulous, life changing adventure – much like the one we experienced together during my first teacher training retreat to India in 2012. Only different.

I spent 4 days backpacking through the Grand Canyon and learning about geology, astrology, and the secret to amazing backpacking meals.

This morning, after our morning practice, we compared notes so-to-speak. Practicing in adjoining rooms but not visible to each other, can be interesting – especially after a 2+ week break from it. He described how good trikonasana feels as it allows his back to release. By comparison, I described how I was unable to grasp my toe today as the tug I’ve been experiencing at my right hamstring attachment was all the more limiting the past couple of days.

He then asks, “Did you do *any* practice at all during your trip? I mean even a few stretches….*anything*?”  I laughed and thought, “Umm, yeah! Of course I did — every chance I got.” 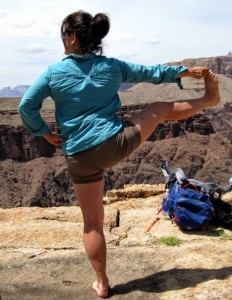 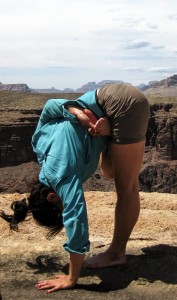 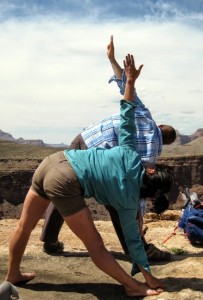 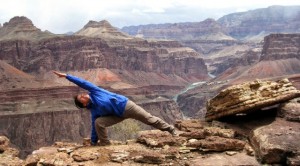 My backpacking trip in the depths of the Grand Canyon is behind me now. Oh what a fabulous adventure it was. You can read more about it on my companion blog: Keeping Pace.

We emerged from the canyon on Sunday and, adding in travel days, it’s been about a week since I’ve done any sort of real practice. Sure, I busted out a few poses here and there: a little lunchtime play at one of the overlooks, a bit of post trek stretching (downdog) after releasing the pack for the night — but nothing substantial in the way of “practice.” 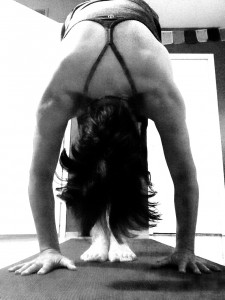 One would guess that the body would have changed in that amount of time coupled with the level of difficulty of trek I was undertaking. Admittedly, I was a little fearful how things would go when I finally stepped back onto my mat this morning.

Easing my way into it, I let my knees bend considerably for the first few forward folds. I allowed my torso to rest on my thighs so my back could release and find a little opening.

I proceeded with caution, mindfully paying attention to my breath and letting the sequence come back into memory from months of repetition.

Today, I only went as far as the standing poses and ended with a few tummy down back bends that my teacher gave me back when I returned from my injury to my SI joint. Tomorrow, I’ll try adding the seated poses and see how my body responds. It may seem a little bit over protective, but I’d rather be safe than sorry. Given the fact that I was feeling some pain near my right hamstring attachment when I left for my trip, I think it makes sense to return in this manner. Would you agree? 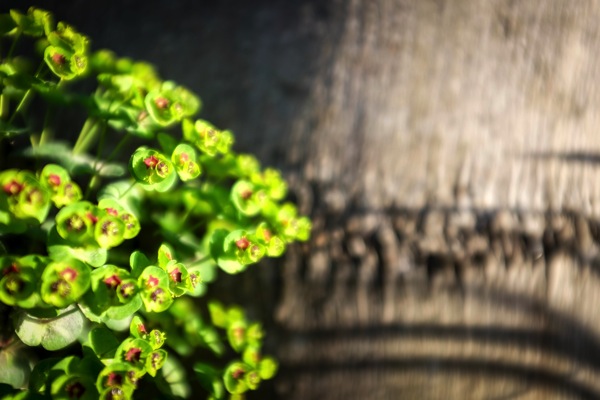 One of my fondest memories from high school was hearing my cross country coach singing the phrase “no pain; no gain” as one of my cross country teammates (myself included) would fall off pace or give into the discomfort of a hard training run. It wasn’t that he was advocating us to ignore pain which signaled injury; he was simply challenging us to find a little ease in the midst of the discomfort that comes from pushing our edge. In this same manner Coach encouraged us develop a mental toughness which would help us overcome adversity such as a side stitch or an opponent pulling ahead. The lessons he taught us brought us success during our cross country meets and ultimately in our everyday life.

Over the years, his lesson of mental strength and discriminating assessment of physical aches and pains have helped me not to give up in my race when my goal was slipping out of reach or fatigue was getting the best of me. Even if I didn’t perform as well as I’d hoped, I took pride in not giving up – which made it easier to go out and try again and again. Although I am not currently running, the phrase “no pain; no gain” still has meaning – with continued discrimination of the “pain” part of the equation. In the past many months, my understanding that the process of breaking deeply ingrained patterns which no longer serve me can be painful has grown. I’ve come to appreciate the value of working through it.

For the first part of my yoga journey, my home practice would consist of moving into the postures that felt good and avoiding those which did not. That approached worked for a while but ultimately I started experiencing injuries. This selective sequencing became a thing of the past when I shifted to ashtanga. The set sequence does not allow for doing only what feels good. I’ve learned that it is equally, if not more, important to do these poses too. Working through it has value and, as Tim Miller says, “Avoidance is not the answer.”

In a recent yoga workshop, David Robson talked a little bit more on this topic. He reminded us that we get good at what we practice. If we are in the habit of slouching all day our body gets good at that and even changes physically to make it easier for us to sit and stand with poor posture. It’s when we try to reverse the process that discomfort surfaces. Suddenly the muscles of the back which have been stretched to allow us to round our backs and lean off to one side or another have to work while the muscles in the front of our bodies that have become overly tight have to learn to lengthen. It’s uncomfortable!

On the mat, the same process goes on.

Taking this concept to heart, and following to my teacher’s guidance, has allowed me to grow in my practice and learn about my body via these messages of pain. Whether it is my wrist’s urging me to pull my shoulders back so that they are over my wrist instead of out in front or my hamstrings tugging at the insertion points as a reminder to pull my sit bones toward each other as well as towards the front of my body (via mula bandhas), the discomfort allows me grow. It’s hard work and, often times, painful. But I truly believe that it is making a difference.

I have always had a fascination with the moon. Thanks to my ashtanga practice, my appreciation has expanded to include the lunar cycle. In the beginning, my awareness was nothing more than knowing when mysore (or led practice if it fell on a Friday) would be canceled. A simple internet search of “moon days” provided me with a nice printout of all the full and new moons for the year. Keeping track of these days, and honoring the tradition of taking rest, has lead to some understanding (albeit small) of the basis for the tradition’s encouragement to be attuned to the forces of nature.

I find it interesting how the moon’s position changes the gravitation pull on, not only the waves of the ocean, but on us as well. The practice of taking the day off instead of practicing affords me the chance to observe myself in a different way. Instead of finding out the hard way, I can simply observe whether I am more headstrong under the influence of full moon energy. These tendencies become increasingly more apparent in the days leading up the full moon.

This past Sunday, our teacher (Mojdeh) interrupted our practice to remind the everyone in mysore not to push beyond our limits. Although I was already feeling a new twinge at my hamstring attachments, I did notice that I was trying to push past it. By Monday, there was no way I was about to push past it – which is a big reason I am most appreciative this particular moon day.

Another reason to enjoy the moon is because of the cool total lunar eclipse that had me digging out my tripod and primitive nighttime photography skills to attempt to capture an image of it. Of course, having trained my body to wake early for my daily practice, it was not very cooperative with my efforts to stay up late – even with the promise of sleeping in until 6 am. I ended up setting up the interval timer and went to bed with the hope of getting up periodically to see the event at some point.

Unfortunately, the few times I peered out the window all I could see was a haze covered moon partially eclipsed. I finally gave up all together and turned off the camera around 12:45 am.

Apparently, the sky cleared up shortly after I gave up. Nonetheless, any serious photographer would not have let themselves fall asleep on the job. The moon moved out of the frame several times which might not have occurred had I not been zoomed in as much. Additionally, photographing an eclipse requires one to adjust the settings such that enough light is being let in to get a crisp image. Maybe I can get a better image on October 8th, when the next of four lunar eclipses (set 6 months apart) is due to occur.  Until then, the above image of the full moon (uneclipsed) will have to do.