As I age, it is all too easy for me to get caught up in the things and parts of myself that are just not the same. Whether it is a physical pain/discomfort that I am feeling, an inability to perform a physical movement (such as a pull up or particular asana), or the broken garage door that has me parking my car outside.

These changes are just that: changes. They aren’t necessarily good or bad. They just are.

Sometimes we think things are one way… END_OF_DOCUMENT_TOKEN_TO_BE_REPLACED

Have you ever noticed that when your being watched (or in a position where you could be being watched) it’s easy to stay focused. But when know one is holding you accountable, it is easy to let your gaze shift away from your target. Of course, I am not just talking about yoga. I am talking about the goals we set for ourselves as well as the deadlines established by others. Interesting enough, it seems that the latter always seems to push the former out of sight. 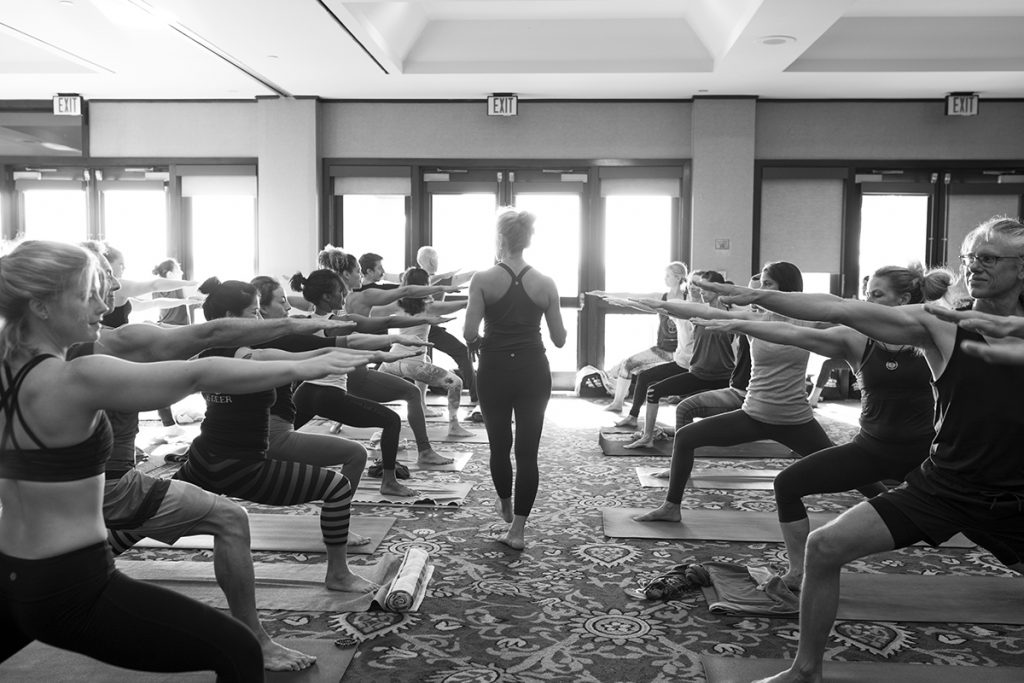 Fortunately, we don’t experience competing dristhis in our ashtanga yoga practice as each pose has a specific gazing point. It is in my practice where I can observe how I lose focus and then, upon noticing, pull my attention back to where it should be. The practice serves as a training ground for life off the mat. Sometimes we find our sights repeatedly shifted on the wrong gazing point. I can’t tell how many times I notice that I am staring at the ceiling or back wall, instead of the tip of my nose, as I am taking my final breath in Kapotasana.

Similarly, I’m always being pulled in multiple directions. Work, my boys, the gym, homeowner ‘stuff’, etc. They all compete for my attention and my focal point is not always clear. Some days, I just want to crawl back into bed.

A month or so ago, my yoga teacher asked the rhetorical question of why I would do subject my body to running.  Not being a runner herself, she could not appreciate the desire to run.  She is, however, a mother and, had I given her my primary reason WHY, she may have changed her tune.  Or perhaps not.  Anyway, while my running and fitness routine may not be conducive to a smooth yoga practice, my yoga practice does seem to be quite complimentary to mitigating to stress that my workout routine has on my body.

The driver for my return to working out (running and weight lifting) was to allow me to participate a the June Spartan Race with YaYa, my 19 year old son. If you have children around this age, you may know that opportunities to spend “quality time” with them are not something to take for granted. I am trying to take advantage of even the smallest of opportunities, such as watching the Super Bowl with BoBo, my firstborn (who may be moving  away in the next year or two).

The rope climbing aspect of the Obstacle Course Races (OCRs) has been an area of concern for me. One of MANY.  I have researching the topic by reading and studying YouTube videos on the various foot wrap techniques.  I even bought myself a rope to play with the wraps in my garage. Unfortunately, the only beam in the garage I trust to use for is not all that high.  Last night, I was thrilled to find that my gym had re-hung the climbing rope in the outdoor turf area.  I could see if from the parking lot as I drove in. In my excitement, I rushed inside to share the news with my son.  He was in the middle of a serious lifting session but immediately suggested that we go outside to check it out.

YaYa made the first climbing attempt. Although I subjected him to the foot wrap videos, he had not studied them as intently as I had for he figured he could use his upper body strength as needed. He made it to the top without any fuss and even did one of the foot wraps that we had seen.

Now, it was my turn… END_OF_DOCUMENT_TOKEN_TO_BE_REPLACED

Last night, I knew that I should get up off the couch for some sort of training for the Spartan Obstacle Course Race (OCR) I’m now signed up for. Unfortunately, I did NOT convince my tired and achy body to rally. Instead, I watched a little television, practiced my guitar briefly, and went to bed early. Was it a failure? Perhaps. However, I was successful in resisting the urge to order dinner through doordash. Instead, I took the time to cut up a whole grass-fed chicken and bake it for my boys and me. I also resisted the strong urge to get the ice cream I was so badly craving.

The sluggishness persisted into the morning. This morning, I sat on my couch sipping my shot of espresso noticing the profound feeling of blah. I did NOT want to go to yoga; I wanted to go back to bed. But I could not let myself give in to the blah energy again. Somehow, I managed to drag myself to the studio for mysore. I didn’t know how much I had in me but I figured that I would just start my practice and see how far I could go.

Over and hour later, I was still at it. My teacher spotted me just as I was preparing for (kapotasana) my most demanding asana. Kneeling on my knees, I reached up towards the ceiling on the inhale. My teacher, who stood in front of me, placed her hands behind my upper back as I bent backward, reaching my hands back and down to the mat. She had me walk my hands toward my feet and then helped me touch my toes (albeit barely) before resting my elbows to the mat for the prescribed five breaths. Then I straightened my arms (or attempted to), took five more breaths, then lifted my body back upright. One time in this pose, especially when assisted into it so deeply, is enough for one day. I was ready to move on when my teacher asked if I had another one in me. I thought about it briefly, then answered, “Yes. I can do another.And I did!

END_OF_DOCUMENT_TOKEN_TO_BE_REPLACED

Over the past couple of months, I have been trying to learn how to play guitar. Cortnee, my guitar teacher, is a friend and fellow yoga practitioner. So when I first complained about how difficult it was for me to get my fingers into the positions required for each of the chords I was to learn, she told me that I should view the attempts as a yoga-like practice for my fingers.

Later that week, I watched the episode of Friends where Phoebe teaches Joey to play guitar in a most unconventional way. I was most grateful that my teacher’s style of teaching guitar is very different. If you haven’t seen the episode in a while, THIS is what I’m talking about.

Ever since Cortnee’s initial juxtaposition of guitar and yoga, my mind has automatically found similarities in many of the teachings she has given me. Take chord changes: Initially she taught be to place down one finger and then place the subsequent fingers. Once I got that down, she advised me to try to make the chord shape in the air and place all of my fingers on the strings at the same time. She said that although it would be more difficult to do it in this way, once I mastered the change, I would be better able to keep up with the count. To this end, she insisted that it was of utmost importance to keep the set count throughout the song. I should slow down the count if I am unable to keep up the speed throughout the entire song being played. She also insisted that I should practice with a metronome as much as possible.

I thought about my ashtanga yoga practice and quickly drew parallels to the lessons. The chords are like the asanas. Initially, the yogi might need to breakdown getting in and out of the poses, but the ultimate goal would be to come out of the vinyasa and straight into the asana shape. Of course that is easier to do with simple poses like dandasana but not so easy with poses like marichyasana D. The vinyasas are the chord changes. And the count is… well… the count is the count.

Keeping up with the count, while playing with a metronome is like the attending the weekly led practice. You might fall behind, or get ahead, but the discipline of keeping up with the pace the teacher calls helps you to  stay focused. Ultimately, it helps you turn your daily mysore practice into more of the meditation that it is designed to be.

Whether it is yoga or guitar, it doesn’t come easy. But it’s definitely worth the effort if only for its meditative benefits.